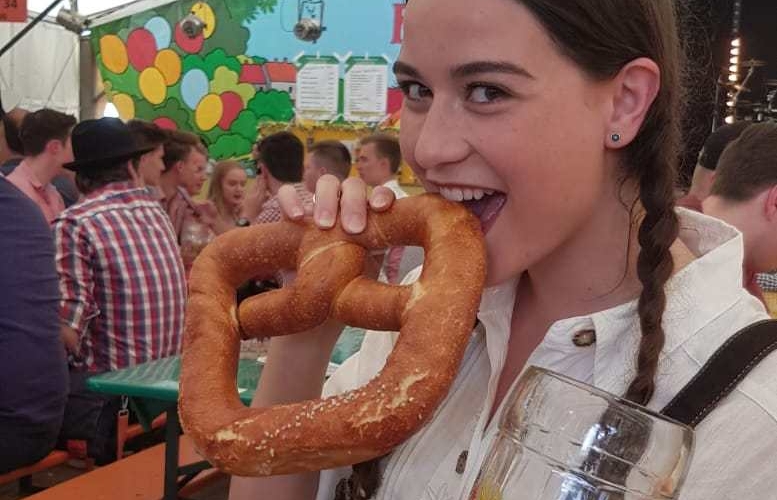 Recently I had the pleasure of attending the Bergkirchweih in Erlangen. This is a festival similar to Oktoberfest, where beer is sold everywhere in large tents and people gather for music, traditional food, and fun carnival rides. People often dress in the classic lederhosen or dirndl clothing and participate in several beer-drinking traditions. One of these traditions is called the Kastenlauf, or crate walk, where festival attendees buy a crate of beer (around 20 bottles, 1/2 liter each) on their walk to the festival. Much like American “pre-gaming,” this tradition typically requires that participants finish the entire crate of beers before arriving to the festival.

While the Kastenlauf was one tradition I did not participate in, I was fascinated to see several people lugging a case of beers and chugging their beers as fast as possible. Perplexed but not at all surprised by this behavior, I jokingly told my boyfriend, “They’ll probably have to finish all of those before they can get into the festival, right?” As per usual German rules, you are normally not allowed to bring any sort of drinks with you into restaurants or fairs (though I’ve gotten away with the occasional water bottle). So when my boyfriend outlined the rules of the Kastenlauf, I was rather astonished that the rules of this tradition also require that only 2 people carry and must finish the case of beers prior to entering the festival.

In any case, I was happy to walk around these brave souls and make my way into the excitement and beauty of the festival. With beautifully decorated Lebkuchen hearts, the smell of sausages cooking, and people hauling their giant mugs of beer everywhere, I couldn’t wait to join the party.

As the afternoon went on and my giant pretzel and Obatzda arrived, I was pleased to have something in my stomach to accompany the giant Radler (beer mixed with lemonade) sitting in front of me. But the later it got, the more crowded our giant tent became… and the festival attendees grew even more rowdy with the help of endless alcohol and Schlager music. For a person who hasn’t had enough to drink and doesn’t feel particularly comfortable in a crowd, this became a little too much and made me increasingly uncomfortable with this new cultural experience.

Finally, my boyfriend and I decided to get away from the noise and check out the rides and activities sprinkled across the “Berg” (which means “mountain or hill” in German). According to a classmate at my university here in Erlangen, of the most iconic and well-known aspects of the Bergkirchweih is the giant ferris wheel. Naturally, we had to take a look and after short deliberation we decided to bite the bullet, pay for two 7 euro tickets, and jump on.

It was the perfect way to end the evening and left us with a stunning view of the entire festival. Overall, the experience was not at all something I would have expected- and it is certainly something I’d try again (on a less crowded day). Now, I’m looking forward to attending Oktoberfest this fall and experiencing what is basically the Coachella of Germany.